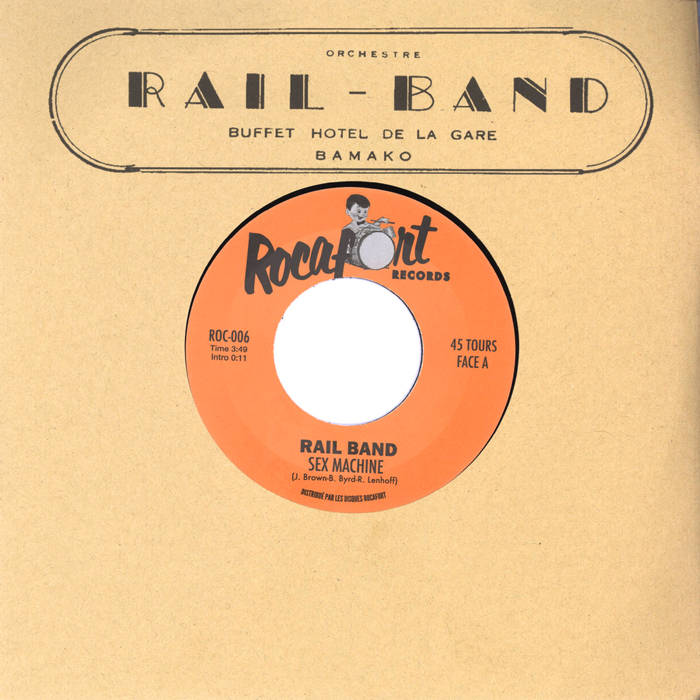 In its 1970's prime, the Buffet Hôtel de la Gare de Bamako used to mix a broad and diverse clientele of Bamako's fine society and hookers, Western, Chinese, Russian and Arab businessmen with diplomats and African entrepreneurs. Rail Band's music became the exciting soundtrack of modern Mali, blossoming like a big bright bouquet of tropical flowers. In its heyday, the orchestra pretty much defined by itself the idea of afro-pop.

Musicians such as singer Salif Keita, singer Mory Kanté, guitar player Djélimady Tounkara and the late bandleader and sax player Tidiani Koné all graduated from the Rail Band before turning to more or less successful solo careers. The Rail Band got started in october 1969 as a regular orchestra in the railway station premises.

In order to keep up with new forms of fusion music which could be heard in Dakar or Conakry night clubs or "paillotes", trumpet player, sax maestro and bandleader Tidiani Koné recruits some bold element for his orchestra. Both a griot and a jazzman, Tidiani Koné was a former Orchestre National A musician. His main idea was to bring Malian music out of the dead-end of afro-cuban and Western imitations. He took the chance to recruit a young albinos singer, accompanying himself with a cheap Chinese guitar.

Koné was the first one to understand that Salif Keita's voice was pure gold. At the end of 1969, Salif Keita, Tidiani Koné and rythmic guitar player Mamadou Diakité practiced for weeks as a trio in order to forge a repertoire of their own. Other musicians such as guitar player Ousmane Sogodogo and lead guitarist Nabé Baba, timbales player Marius as well as percussion player Abdouramane Koumaré soon join in, encouraged by Koné.

In July 1970, the Orchestre du Rail Band de la Gare de Bamako gave its first concert, on a tiny open air stage, with palm trees breeze and stars above them. The Rail Band rapidly became one of the city's main attraction. According to its initial status, the Rail Band must "explore and propel mandingo repertoire in order to aim at the neo-classicism of African chanson". Born in the heart of the Mandé griot tradition, Salif Keita knew the classic songs. Soon, the folklore part of the repertoire was more prominent than the blues and afro-latin numbers.
Musicians were paid by the Malian train company, ie by the state, who also owned their instruments. Combining mandingo and bambara traditions, French pop, afro-cuban rhythms, Congolese rumba, American rhythm'n'blues and calypso, the Rail Band's rise to fame was striking, paving the way for numerous modern orchestras to follow. They rehearsed five days a week from 5 to 6 pm, before changing, dining and taking the stage from 9 pm till the last customer left the Buffet, sometimes early in the morning. In order to help empty the premises from its patrons, Rail Band musicians played late night jazz themes, strongly encouraged by Tidiani Koné.

With his saxophone hollering at some distant tropical moon, his heartfelt horns arrangements added a sense of epic grandeur to the Rail Band songs. His bold musical mastery set Salif on orbit while modern instruments and instant melancholy radiate through a song like Massaré Mousso. He sings about some impossible love : "If you don't have anything to do, fall in love with a woman who doesn't love you / If you dont have anything to do, fall in love with a man who doesn't love you". His voice was frail but Salif shows evidences of his vocal grandeur to come. In the early 1970's, it seems that the Rail Band knew instinctively how to go down in musical history.
The orchestra took off, thanks to Salif's youthful vocal prowesses and to the sheer intensity and dedication of musicians led by Kon'.

Guitar player extraordinaire Djélimady Tounkara joined the band in 1971 as a new recruit. His arrival enabled the Rail Band to reach new heights in a dazzling ascension of recordings done in a tiny Radio Mali studio. His rumbling electric guitar became one of the band instant trademark. Guinean balafon and kora player Mory Kanté also jumped in as the Rail Band was by far Bamako's finest orchestra in the 1970's.
Directly inspired by James Brown's funk achievements, Sex Machine belongs to the band's legend, an incredible cover which is both heroic and mesmerizing. It is a pure slice of raw and spicy Malian funk, one of those "straight to your face" songs with a devastating outcome, courtesy of Mamadou Bagayoko's heavy drums and Cheick's Traoré sturdy guitar bass playing. Alfred Coulibaly's Vox organ adds up to the hypnotic mood of the song.

Looking for the Rail Band's trails these days, one has to stop by the old Buffet Hôtel de la Gare in downtown Bamako in order to feel the countless, panoramic and moving memories of this unrivalled musical golden age and this masterful orchestra.